Christmas is over, the gifts under the Christmas tree in the Town of Paxterya have been collected, and hopefully everyone recharged power for the upcoming year!

Despite the holidays, many Paxteryans still found time for playing some Minecraft, and some infrastructural milestones have been achieved!
The Nether hub, while far from finished, has majorly improved in both looks and logistics. There's now a post office with one chest for each Paxteryan where you can leave somebody a package before rapidly getting to the upper level of the hub via the new minecart elevator. But most importantly, it's safe!
And in the next year, much more infrastructure is to be expected; the Town government has already planned a harbor as well as a train station and rails to the other town, Penliam! If you want to take part in these or other projects, just message our mayors Veikmaster and jadesheep! 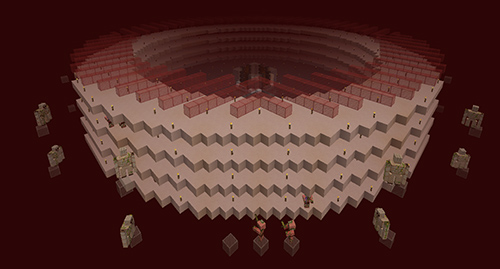 Three Paxteryans, Dexter, Escanor and ChryoFyre, have been busy like bees and provided awesome farms to the whole of Paxterya! In the Nether, you can get tons of gold from pigmen and in the End, you can get endless XP from Endermen! Pun intended.
And for all the other things you might need and can't get from those farms, check out one of the many shops that have been built in the Town of Paxterya! A good overview over all the shops can be found in our #marketplace Discord channel.

We wish you all a good start in the new year and warmly invite you to take part in the shaping of Paxterya if you're not already a member. We can't wait to see Paxterya evolve in 2020! See you next year!